Over the past nine years, we have come across many terror bombings and theories. Yet each time, it has been next to impossible to pinpoint the real culprits. Many claims of responsibility are made. Often, though, these only blame the wrong parties, to distract or justify counteractions that benefit the real culprits. With such “false flag” operations in place, ostensibly carried out by governments, powerful corporations, or criminal gangs, usually, the only way to pinpoint true responsibility is to ask: “Cui bono?” or “Who benefits?”

As history, including modern Philippine history, is replete with such terror acts, let us examine these events from this vantage point: From the F-I-D-E-L bombings to the present series of blasts, which I call the Mindanao-Manila bombing axis, to one which occurred in not long ago that remains significant to this day--the Michael Meiring case.

The F-I-D-E-L bombings of December 30, 2000--which started at the Ferguson plaza in Ermita; followed by the Ninoy Aquino International Airport; then Dusit Hotel; then later, inside an Edsan bus; and finally on the LRT--culminated a series of bombings that year, and were blamed on President Estrada for an alleged justification of Martial Law, an accusation that even Cory Aquino leveled against him in January 2001.

It turns out Estrada stood to gain nothing from those bombings because those who reaped the whirlwind were the ones who rose to the crest of usurped power. Of course, since the operatives comprised police and military elements, blame was eventually lodged onto three hapless Muslims.

After Edsa II, came the series of bombings in that started with the Evergreen Hotel on and several lesser known blasts thereafter; then the on March 2003; followed by a blast at the a month later. In the Evergreen incident, the Davao City Prosecutor’s investigation concluded that American Michael Meiring was assembling a bomb in his hotel room when it accidentally went off, causing him to lose his legs. Just three days after he was rushed to the hospital for emergency treatment and before local authorities could conduct a more thorough probe, the FBI with the embassy swooped down, paid Meiring’s bills, blocked local investigators, and then whisked him off to the .

According to a newspaper, Meiring was whisked away “without the knowledge of any police, military or government official in the city or region,” prompting Mayor Rodrigo Duterte to brand this an “affront to Philippine sovereignty.” Worse, Meiring was even visited by a governor, a congressman and some military officials prior to his flight, which shows that he was well connected.

The has since requested the for Meiring’s whereabouts but nothing has happened. Internet sources report him now operating under a new name--Van der Meer--either in or .

On Sunday, new CIA chief Leon Panetta arrives in for a lightning visit, as Ambassador Kristie Kenney sheds tears over the recent spate of bombings and calls for more urgency on the MILF-GRP peace talks. But shouldn’t they first clarify the ’ role in by telling us where Meiring is and respond to the ’ request for his extradition?

US recalcitrance only compounds the treason that is the Memorandum of Agreement on Ancestral Domain (MoA-AD), cooked up by the United States Institute for Peace--headed by J. Robinson West, corporate chief of PFC Energy, the largest petroleum and natural gas consultancy in the world—that advises US oil companies on how to get into the much-coveted BangsaMoro Juridical Entity, which Mindanaoans have vehemently stood against.

On , a group of young, patriotic officers in Oakwood alleged an Arroyo-US conspiracy, dubbed “Operation Greenbase,” which involved bombing Christian churches in to spark a religious war, with some saying, to also justify increased presence in the country. That exposé also identified the suspicious presence of the shadowy Arroyo cohort (now general) Victor Corpus in those bombings.

Naturally, Arroyo and her military cohorts belied such claims, but why did then Vice Chief of Staff Lt. Gen. Rodolfo Garcia tell the Feliciano Commission that a “Third Force” could be behind it, with Cotabato Archbishop Orlando Quevedo branding them as a “group of desperate people?”

Fast forward to the present, the government and Ayala executives are still at odds as to what really caused the Glorietta blast in 2007. At first, then PNP chief Avelino Razon said that it was probably a bomb blast, with the NSA blaming it on “terrorists,” despite the fact that a government asset admitted having cased the place a few months before. But just as quickly, Malacañang, the PNP, and the FBI changed their story altogether.

In the latest bombings, asking cui bono would ultimately lead us to US oil interests, as well as, the MILF--both of which worked with the Arroyo regime to torpedo the MoA-AD. The unexploded bombs “discovered” in Manila will only accelerate the Gloria Arroyo-Bert Gonzales “August Moon” that signals the appointment of Hermogenes Esperon as DND chief--something which we have been told as far back as a month ago.

Naturally, under the “false flag” doctrine, perpetrators have to be properly situated or positioned to fully benefit from their malevolent “false flag” schemes. 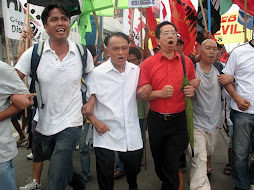